Hey Guys, Today I have brought you The Rabbit and Turtle Story, which you must have heard in childhood, and today you might like to narrate it to your children too, so let’s start the story.

Rabbit and Turtle Story for kids

A rabbit and turtle lived in a forest. The turtle used to move very slowly. He never used to do any work in a hurry but the rabbit does everything very fast and he was very proud of it. He also teased the turtle very much for his slow movement.

One day the turtle was going somewhere and suddenly the rabbit stopped him and said, “Hey you, can you never walk fast? Come on today, do a race with me and see Who wins? and who will win he will get a huge reward”. The turtle thinks for a while and then tells him, well start the race as you wish. The rabbit said the race will end after reaching that pole.

The race has started. The rabbit jumped at once and reached far ahead. And the poor turtle was slowly following him. All the animals of the forest started talking to each other.

[Animals saying to eachother] Hey, I don’t think the turtle will win. Yes, I also think that the rabbit will win just now. The turtle can never win. He is moving very slow and And all animals talk about this among themselves.

The rabbit went very far. When he looked back, he did not see the turtle. He went under the tree and sat down. He started thinking. Hey, he is not going to come yet, no-one knows how long he will take.

Read also:- The Monkey and The Crocodile

Maybe he would reach here after one year, Thinking like this, he started laughing and said to himself. By the time the turtle reaches here, I sleep a little. After sleeping I will beat him.  After a while, the turtle reaches there. He did not see the rabbit sleeping. He crossed him without making a sound and he overtook the rabbit. 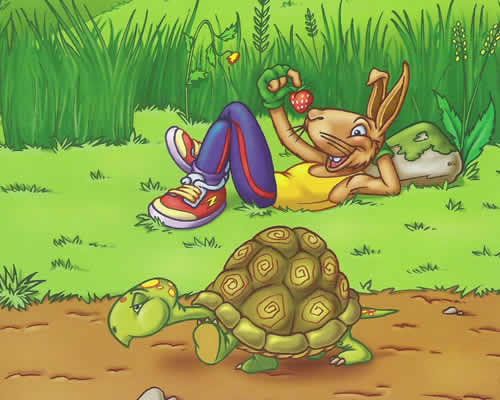 After a while when the rabbit woke up from his sleep, he noticed that there was no one around. He felt that the turtle was still far away from him, so he ran again to complete its incomplete race. When he reached the end of the race, he saw that the turtle had already won the race.

Moral of the story:- we should do good with everyone. If we do good to them, then we can change his behavior with our goodness.

Challenge:- Why the rabbit loses his first race? Crack this in the comment box

About the author Devesh

I am 21 years old. I am a man who loves a simple lifestyle. I love to explore new places and relationship status is absolutely single ( hahaha ). currently I am running this website and doing a 9 to 5 job As well.